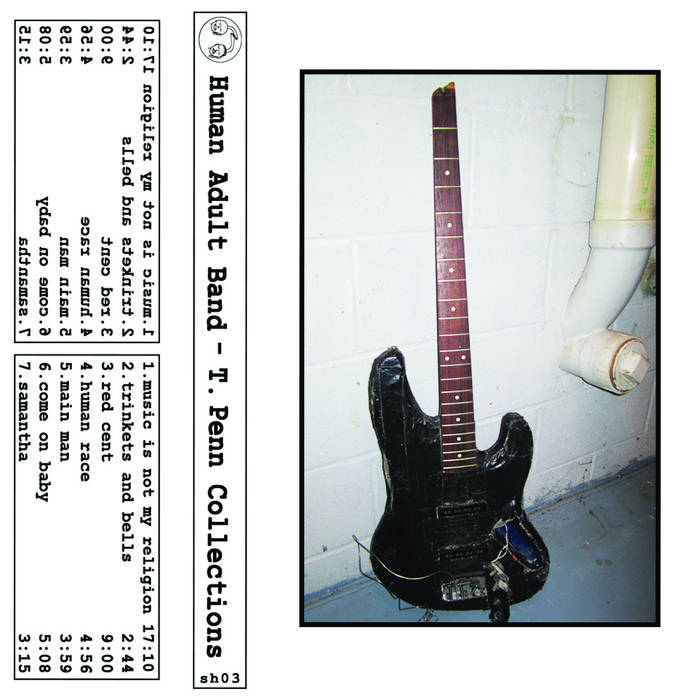 Since the late 90's, New Jersey gunk centerpiece T. Penn has dealt in various forms of disembodied, menacing punkedelia. For this offering, T. Penn, chief architect of his Human Adult Band, has handpicked eight rarities from the archives.
With a bent mirror to the spirit of Subterranean Records-era Flipper, T. Penn conjures an outsider haze, a destabilized psych vision. In this, these Human Adults are implacable and humorous, not at all mystical, but still complex, in the style of the late Jim Shepard à la Vertical Slit/V-3 or somewhere between the whimsy of The Garbage and The Flowers’ Stoned Rehearsal and early Pinakotheca. T. Penn Collections stands as a vestige of carefully manicured messthetics, an unshakeable vision of decrepitude as fortitude.
In a move toward conceptual attrition, the 46-minute A-side presents the B-side in reverse, transmuting the familiar elements into an even more alien prayer. The aptly-named 17-minute ceremony, “Music Is Not My Religion but This Is My Prayer,” opens the B-side with violent, tectonic low-end shifts, a paean to the process itself. From there, the collection proceeds fearlessly and enigmatically, from solo dirge, to guitarrock squall, to subdued bedroom renditions (of Marc Bolan and Jersey's own R. Stevie Moore). Constantly questioning the premise, never staying complacent in all-too-familiar forms, T. Penn Collections emboldens the ever-sideways mastery of T. Penn and the Human Adult Band catalogue.

**Saga House is a new independent cassette label operating out of Philadelphia, PA focused on spotlighting the solo works of musicians and sound artists. The label is a curatorial project to recycle a load of 1700 blank cassette tapes and a duplicator found in a church basement in 2014. Saga House is a not for profit endeavor, selling the tapes directly for $3 a piece.** ... more

Bandcamp Daily  your guide to the world of Bandcamp